LPG: Gas of a Different Kind

How has LPG worked for the impoverished masses of India? No, this is not about gas cylinders, this is ‘Liberalisation, Privatisation and Globalisation’ as my young professor friend Pravin refers to it.

Doesn’t matter which species of government, Congress or BJP, all are votaries of the rich, elite, urban, clamoring classes who have gained most from the Great ‘Opening Up’ of the Indian economy since 1991. i.e. people like moi. What has certainly come about is a massive increase in inequality (9 dollar billionaires in 2000 AD; 101 dollar billionaires in 2016), and a complete turning away from the poor in general and specifically from rural India and agriculture.

There is only one narrative that holds the attention of those in power – of the private market, of conspicuous consumption, and of the interests of the (this is key) urban consuming classes. The BJP leadership personifies this so well, in their manicured clothes and public persona. Not that the Congress didn’t. It is clear that the BJP is = the Congress + Cow – Family = same as Congress. Blood relations all, colored by greed and self interest; aligned to the very same businessmen who not so long back vociferously supported the Congress; and then some more new ones. The Urban Bias remains valid, Congress or BJP.

Please watch this NDTV interview between Prannoy Roy and Rakesh Mohan, an economist … but after you read my post and obtained my perspective. They both are discussing the ‘transformation’ and ‘liberalisation’ of India for 28 minutes, while pitching Mohan’s book, but what struck me singularly is the absence of common people in their discussion. Yes, it is a limited time window on expensive TV prime time, but is there another TV program where these two worthies and their clones in their suave, gentle, polished ways; in suits and public school english discuss the issues of the vast majority of India that, would you believe, is terribly poor? How did 1991 and post 1991 policies impact the life of the poor, the peasant, the landless, the traditional artisan? Were their livelihoods enhanced, and why not? Who benefited? Has anyone asked? Is anyone bothered? Not Prannoy and Mohan, which is par for the course, but really which politician or bureaucrat or businessman’s heart bleeds on seeing the terrible inequality?

Prannoy, a truly wonderful representative of rich, elite, urban India reminds young Indians ‘how lucky they are’ for the times they live in. ‘How gloomy it was’ ‘ things have improved’ ‘days of public sector’ ‘moved from closed to open economy’. He obviously is talking to people like us, the 2% households who earn more than Rs 50,000 a month; OK let’s be generous and include the 12.8% of Indian households who earn more than Rs 20,000 a month. He clearly isn’t talking to the 87% who earn less than 5,000 a month per head. Or he never really intended to?

Which India are they talking to, or talking about? Not the one most Indians live in. So what if they have that mobile phone. In our democracy that is so brutally captured by the rich and powerful, all policies have been constructed to enrich the already wealthy and privileged; even more viciously since 1991 when the rule of the free market jungle has been unleashed with all its ferocity.

See the programs headings in this interview, so well presented to an urban audience lapping it up “Industry Transformed, Trade Transformed, Import Duty Slashed, Financial Sector Transformed, Stock Market Transformed, Infrastructure Transformed: phones, airlines, airports, housing loans, retail lending”.”Everybody is buying mutual funds” Really, Prannoy? Who is? Who travels through these airports, buys those easily available consumer goods, obtains those loans, buys those shares? Small scale industry reservations as something for Prannoy to laugh and sneer at, something to throw away not something that serves a national purpose for the poor and needs deep reforms; these could have created employment for the tens of millions, but what we have is Big Industry – that does not create any new jobs, but generates wealth for those already with enough – crowing over devastated handlooms and other traditional artisanal occupations.

At 16:42 minutes, more than halfway through the interview, Mohan lets out – truly puzzled – that he has not been able to understand why India never concentrated on Agriculture …”somehow it never received the focus”. Prannoy quickly steers him away in 10 seconds, back to Trade.

Interestingly, (my uncle, who I am quite fond of) Ajit Singh is mentioned by Rakesh Mohan at 3:40 minutes as the real progenitor of the 1991 reforms. AN Verma and Mohan were both in the Industry Ministry in 1990 when Ajit Singh was Industry Minister in the VP Singh government and Verma and Mohan formulated the ‘liberalisation’ plan that was the foundation for the 1991 one that Narasimha Rao, Manmohan Singh and AN Verma finally pushed through. Hmmm. You will see the irony of the farmer leader being the originator of economic reforms in which the winner -private capital aligned to the ruling elites – gives nothing to the village. Not even lip service.

I don’t cling to any ideology, and my understanding of the world is based on universal humanism where human-created barriers and inequities of caste, religion, gender, race and class are overcome on a continuous basis. I’m not a Marxist as I don’t like totalitarian regimes of any ism, neither am I a supporter of ‘free-market’ Capitalism even though I greatly benefited from it. I am, however, as much a bundle of contradiction as anyone else. But I do have a visceral dislike of the existence (and growing presence) of so many terrible inequalities in my society, a people and culture I am defined by. Inequality gets me really hot under the collar, specially as I grow older and understand what is really going on. I do some things about it where I can, the first being becoming truly aware of these inequalities and secondly writing about it much more than I ever did busy as I was with making a living. It was that time for me, it is this now.

My Jeep sticker since 2011 speaks to the two biggest contributors to disharmony in India: caste and religion. इंसानियत, न जाति, न धर्म I say “Only Humanism, Not Caste, Not Religion” 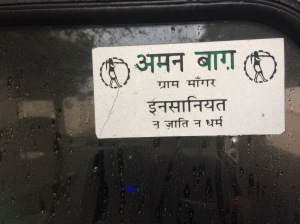 I will accept and work for solutions for our many inequalities that take from all isms and ideologies – as someone (!) said, the color of the cat doesn’t matter is as long as it catches the rat. The biggest rat I see is the one that embodies inequality.

Here is the interview. Let me know what you think.

Natural farming - ऋषि कृषि - enables a cultivation of the mind. How to live a life in harmony with your own self, with nature and other living beings.
View all posts by Harsh Singh Lohit →
This entry was posted in A Day in The Life. Bookmark the permalink.

2 Responses to LPG: Gas of a Different Kind